Posted on 6th Jul 2020 by Thecaskconnoisseur

I believe it’s only right to start of a new week with a tangy and glorious summer beer!

I hope you all had a marvellous weekend, the heatwave over the past couple of weeks has been very nice indeed, I’ve managed to get out on my new mountain bike and cycle around to many scenic places, which I’ve really enjoyed!

The views that I see when I am out cycling are just staggering and it literally takes your breath away!

Pogo is a splendid beer that is proudly brewed by The Wild Beer Company!

The brewery is situated on a farm in rural Somerset in the location of Westcombe and the business started brewing around 2012.

The co-founders of the business first crossed paths with each other at The Bristol Beer Factory, one of the owners, Ellis was a brewer, a cooper, a beer sommelier and worked in business development.

A short time later both owners brought The Wild Beer Co to life and since opening a vast amount of brewing techniques have been used to bring this brewery up to the market.

This brewery is extraordinary and unique, unlike most breweries which just focus on beer, Wild Beer geared up a level and start producing wines and whiskies by using the barrel ageing process.

The two owners adore the ingredients that go into the production of beer and their aim is to brew beer using the finest hops and barley that are around in the country.

Barrel ageing and blending are at the heart of what Wild Beer Co do from day to day basis, the brewers wait patiently for the beers inside the library with over 600 barrels inside to take on the nuances of the previous inhabitants of the wood.

This is the library inside Wild Beer and I have to say I’ve never seen anything like it before, all those wooden barrels which are full of beer or whisky, I would love to try some now haha!

The reality is though that this brewery is the only brewery that I know that focuses on beer ageing and beer blending, I would be keen to see how the process works, I can imagine it would be amazing.

As I mentioned earlier, the brewery is located south and I’ve never been to Somerset before, but I would love to go one day and have a stop off here and just sample away!

I think the other important key factor to consider is that whilst you’re at the brewery enjoying a tour, you can indulge yourself into some marvellous beer whilst taking in the beautiful scenery of the rural area.

In my eyes that is a winner!

A sweet Pale Ale with Orange, Passionfruit, Guava and Mango flavours on the nose leaving a fruity and tropical aftertaste.

This beer was extremely difficult to get hold off and it’s only sold in Sainsbury’s, I was extremely lucky when I found it on the shelf and I was persuaded by all the incredible flavours it said on the can.

Now, you can buy a case of Pogo on the Internet from a beer website called Flavourly!

Or if you’re interested they do a fabulous 20 can mixed case of beers from the brewery and it costs around £35.00.

I was tempted by it, but I thought to myself, it would be cheaper to go to my local store and buy any of the brewery’s beers from there.

Now, going back to Pogo, I was deeply excited to try this beer and to see if it would reach my expectations and I must say I wasn’t disappointed at all! 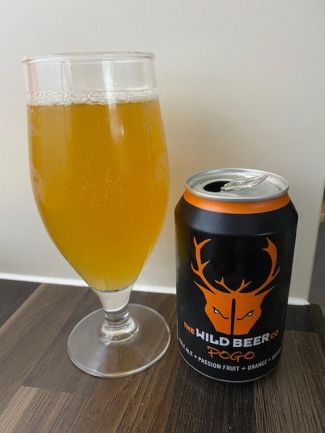 The colour is absolutely spectacular, the can states that it’s an orange beer and visually from this picture you can easily tell.

The clarity was excellent, the taste though was just even better, I couldn’t believe what I was drinking.

It was almost like drinking a fruity cocktail, it was divine and really sweet.

I will admit there was a slight bitter taste on the finish, but the fruitiness of the beer completely overtook the whole concept, it was very powerful and punchy.

I would class this beer as a perfect session beer due to its low ABV, the only important advice I can give you is not to drink it like a fruit juice, it’s better to consume the beer slowly and you’ll certainly enjoy the flavours a lot better.

It was really enjoyable and very indulging.

I would love to try this beer again, on the other hand though, I did notice Sainsbury’s did some different beers from Wild Beer, so I will be intending to try something different very soon!

Wild Beer Co has certainly produced a masterclass of a beer, I couldn’t believe how beautiful and delicious it was.

This was the first beer I’ve tried from the Somerset area and I can guarantee it will not be the last!

Finally, I just want to point out that I really do recommend this brewery, if you haven’t been then I would certainly go, I will be planning ongoing in the future as I would love to see the barrel library.

I also have to recommend Pogo to you, it was very appealing to me and all the fruity flavours were provided, as I mentioned earlier if you’re thinking of buying a can of this beer, Sainsbury’s is your best bet!

I would love to hear your views and to see if you enjoyed this beer as much as I did!