Posted on 22nd Jul 2020 by Thecaskconnoisseur

The post I am going to be writing about today is on the first beer that I sampled from my Honest Brew Best Of British Beers Mixed Case, I didn’t know what to expect, but when I received my parcel a couple of weeks back I was so excited with all the goodies inside.

If you want to check out the Honestbrew website which was where I bought these beers from, you can do so by clicking here.

Table Beer is a low-level alcohol strengthed beer that is brewed by The Kernel Brewery, the brewery is situated in London in the borough of Bermondsey.

The business was found by Evin O’Riordain and the operation of the facility began in September 2009 using a 4 barrel brewery kit.

In his earlier life, O’Riordain sold cheese professionally and also wrote a PhD on communication in the works of Samuel Beckett.

Over the past 11 years, O’Riordain has been at the helm of the business and has grown successfully over the years to now being one of the many UK’s best and most influential breweries.

In 2007 whilst O’Riordain was in New York, he had the desired passion he wanted to owe his own brewery, he’s had the skill of doing home brewing, however, he was ready to go the next level and run his own business, it became a reality two years later.

Next, In April 2010 the brewery expanded even further and opened up its merger space to the general public, however at one time the taproom had to close down because the flood of beer mile crowds proved too much for the brewery’s limited facilities.

The easy way of telling if you’re drinking a beer from this brewery is that all the labels are exactly the same, it’s like tea-stained paper that has been wrapped around the bottle, very rustic and old fashioned, it’s not really appealing to me, it just looks plain.

The brewery has shown that it’s capable to support the increasing demand from all of its clients and customers, however, the brewery only supports bottle production, I am no aware of the facility actually doing cask ales, I could be wrong though!

A well modern look for a brewery, I actually like how the ceiling is all curved at the top, I find that niche and intriguing.

I would love to come down and see the brewery, it’s just a shame its all the way down in London, but you never know when I start driving it could potentially happen.

I think personally the first thing that let it down was the strength, 3.1% ABV is just too easy, I like beer with power and flavour and I just had that suspicious feeling I wasn’t going to get any of that.

Before I cracked the beer open I managed to get a picture of the bottle and my glass for you all to see, this time I went for a small handle glass which I bought from a beer festival in Nottingham! 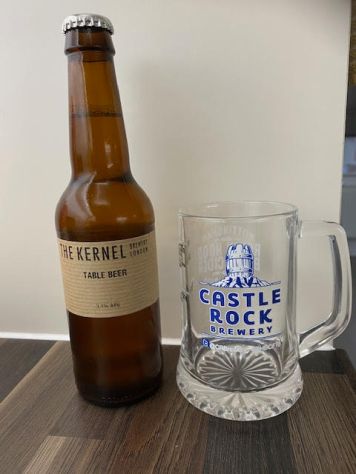 The second thing that was really bugging was the branding, I mean don’t get me wrong I like the old fashioned look, but it just looks a bit plain and boring, I wasn’t getting that wow factor.

However, when it came to tasting the beer, I was thoroughly enjoying it, on the other hand, there was just small key feature that was missing, when I drink beer I love a creamy head on top, sadly this beer didn’t produce a perfect head at all which was disappointing. 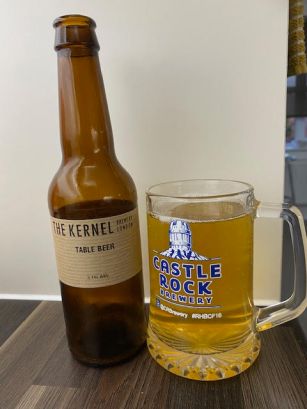 The other point I noticed was how gassy it was for a beer, I mean even though it tasted nice and citrusy, the flavouring and the after taste just made me feel like I was drinking a lager.

This was a massive shame because I was really thinking I was going to enjoy it but sadly it wasn’t for me.

You’ll love some beers, but not all of them, my little top tip there!

This beer wasn’t living up to my expectations, the weakness just didn’t make the beer appealing, on the plus though the flavours were awesome.

I would say if you do like your weak beers, then this beer would be perfect for you and by all means, it would be a great session ale.

However, if you want that power and that extra bit of a kick then this beer I can’t recommend it to you especially that the head was missing on top, I am probably being too fussy, but I like a creamy head on top of the beer.

I wonder what the next beer post could be on?