Posted on 24th Jul 2020 by Thecaskconnoisseur

Happy Friday to you all, another week has swiftly gone by and we can proudly say it’s nearly the weekend!

However, I am also feeling sad but relieved at the same time as I was meant to be going on holiday in a weeks time to Spain, but because of the Coronavirus Pandemic, our holiday has sadly been cancelled.

I am as I said relieved because I don’t feel safe enough going abroad especially that the virus is still around hopefully next year I might be able to plan something if it’s safe!

This next beer review post is the second beer I sampled from my Honest Brew Mixed Case.

You can check out my first review from this case which was on Table Beer brewed by The Kernel Brewery,

Salty Kiss doesn’t sound very appealing by the name, but it is a very intriguing beer and you will find out more later on in the review section.

This fruity ale is proudly brewed by Magic Rock Brewing, the brewery is situated in Huddersfield within the borough of Birkby.

Their aim is to make exceptional beer with care and attention to detail.

The brewery was founded by Richard Burhouse and aided by the head brewer Stuart Ross in an old-out building.

The business commenced brewing in May 2011, with it being a young microbrewery, the history of the company does show how popular it has become over the years.

After the first 6 months of operating the brewery was voted 2nd best new brewery in the world and it also appeared 5 times in the top 100 world brewers on the independent Rate Beer Website.

In order to meet demand, capacity had to be increased twice in the first year by adding more fermenting vessels, the first set were added in October 2011 and the next set was January 2012.

Then, in 2015 the brewery moved to its new and current location in Birkby (Huddersfield) which also featured a taproom and a spectacular automated canning facility.

This is inside the brewery itself and I must say I cannot believe how massive it is, I’ve never been to Huddersfield before but there is one feature that I do love about this brewery and its there taproom, you will find out why later on.

The move also made way for a brewery expansion which allowed the team to upgrade there brewery to a 50hl brewing facility with more fermentors.

Over the years the increase in demand has tripled and it approximately stands at 2.7million pints a year.

Magic Rock Brewing has also got the capacity to deliver their fantastic range of beers around the globe to 25 different countries as well as the UK.

Of course, if you live in the Huddersfield area you may be aware of the Magic Rock Tap which is a beautiful taproom where you can sample and enjoy any of the brewery’s beers.

Now, that’s what you call a taproom and it clearly shows how popular it is, I think I have found another bar to add to my beer adventure list.

Salty Kiss has been around for 5 years and was first brewed in December 2015 and has become surprisingly popular to beer lovers who like something with a twist.

In June 2018, the core range beers from this brewery went through a rebranding phase in order to meet the public eye and become more appealing.

I was sadly disappointed with my first beer out of the case, however, I couldn’t wait to open up the can of Salty Kiss!

I am not really a huge fan of sour beers, because I sometimes think there is no flavour and the after taste I just find it unpleasant, hopefully, this time it might be different. 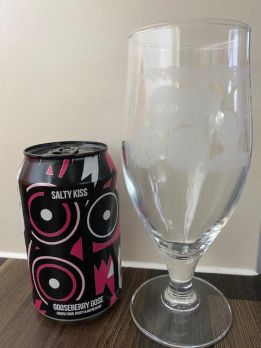 Just look how pretty the can is, completely eye-catching and fantastic artistic skills, one thing I am totally rubbish at haha.

The brewery’s aim was to make the new branding appealing and I would say they have achieved that massively.

Now its time for the important part, the sampling of the beer: 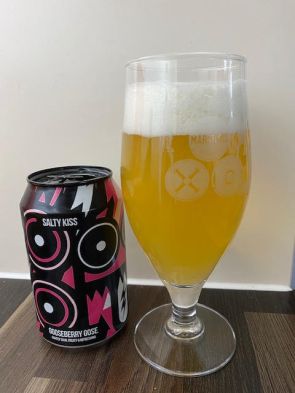 Well, we are off to a good start we have that fantastic creamy head which is one thing I adore about all beers.

The colour is exceptional, its a charming straw colour, it does look very indulging.

The taste was absolutely fantastic, the beer was pleasantly sweet and very citrusy, the gooseberry flavours were very rich and powerful.

Another good note was the sourness throughout the taste, it was lingering but it wasn’t like a heavy sour kick, unlike most sour beers that I’ve tried.

I was really enjoying this beer and I couldn’t believe how much I was falling in love with it, it was a perfect drink.

I wouldn’t class it as a session beer, I mean let’s face it you don’t want to have too much sourness going on, I mean in my eyes 2 cans is plenty enough.

This was a really good beer and I was so glad to get the chance to try it!

This beer is totally awesome and I can happily say that Magic Rock Brewing have clearly got there thinking caps on and have produced a tremendous beer for you guys to try.

Furthermore, I am pleased to say this beer I recommend to you, yes the beer is sour but don’t let that put you off because it’s only a light sour taste, the rest of the taste is the amazing fruit flavours that are provided.

Sadly, I can’t buy this from around Burton, but I would love to travel to Huddersfield and get my hands on some more Salty Kiss!

Get yourself stuck in everyone and keep your eyes peeled for this superb beer, you would all totally love it!