Posted on 7th Nov 2020 by Thecaskconnoisseur

Hello everyone, I am proud to say The Cask Connoisseur is back for good, I have taken a couple of months off blogging, this was purely my own choice.

However, I am now ready to strike back and bring my blog page back up to scratch once again, I have missed it, and I have dearly missed you all.

I really hope every single one of you is keeping well and safe through these challenging times, now that I am back, I am here to bring you gallons of amazing beer related posts over the next couple of months.

Like most of us will know in England, Pubs and Restaurants are sadly close, on the other hand, I have an enormous stash of beer that I cannot wait to try and post content on. 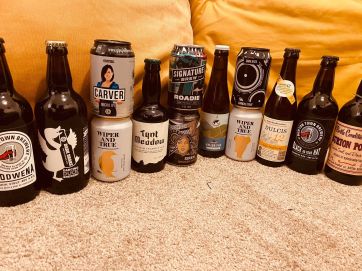 Are you impressed with my stash of beer?

It’s the weekend and I am here to serve you up with a treat on a gorgeous beer called Elvis Juice which is proudly brewed and bottled by Brewdog Brewing Company!

Brewdog is a gigantic brewing company which is based in many countries around the world, two of the listed breweries are based in Scotland, one is based in Australia, another is situated in Germany and finally, the last brewery is located in Ohio.

Brewdog was officially formed in April 2007 and was founded by Martin and James, one term of them starting up the business were literally bored of the industrially lagers and ales, so these two gents decided to brew there own beer.

At the age of 24, they both leased a building in Fraserburg (Aberdeenshire) and spent all of there money on stainless steel brewing kits and started brewing there own hardcore craft beer.

The aim of Brewdog is to make other people passionate about great craft beer as the owners are and still to this very day that provides to be the biggest mission yet.

In 2008, Brewdog became increasingly crazier, Martin and James had to borrow more money off the bank so that they could purchase more vessel tanks and a state of the art bottling machine.

Furthermore, after one year of being as a developing business, Brewdog started exported some of its finest craft beers around the world!

As time went on, Brewdog had become the UK’s fastest-growing alternative beer brand and one the popular contenders of this brewery was Punk IPA (5.6%), it was the top-selling IPA in Scandinavia.

If you see this beer standing around on the shelves in the shops or in a bar, then why not give it a go, you might be surprised with how it tastes.

In 2010, Brewdog went even further and opened up there first craft bar in Aberdeen which received vast amounts of positive comments from many customers.

A gold medal was awarded for Hardcore IPA at The World Beer Cup and James became Scotland’s Youngest Ever Entrepreneur Of The Year.

In 2012, Brewdog relocated from its Fraserburgh site and moved to a new state of the art brewery in Ellon.

I seriously can’t believe how huge this brewery is, it’s just a massive shame it’s all the way up at Scotland!

In 2015/16 saw the arrival of Brewdog setting up its next brewery in Ohio, both the Ellon and Ohio brewery focus on the wide range of beers and are brewed at each site.

Finally, 2016, saw the arrival of Elvis Juice, which is respected to the King of Rock and this is the beer I am providing a personal review on shortly.

An exquisite grapefruit IPA with a zest zenith on the nose. Fruity foreplay gives way to a truckload of grapefruit, orange and peach collide in an inter-state pile-up of citrus.

I didn’t know what to expect when trying this beer, I mean personally, I’ve never actually sampled any Brewdog products before, so what no better way to kick off my relaunch post in style. 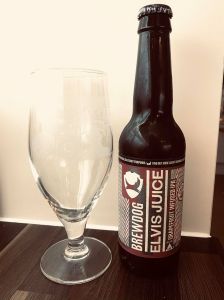 And boy what a beer this is!!

Imagine you’re on holiday now and you’re sipping into a beautiful cocktail, well I can guarantee you that’s what this beer tastes like. 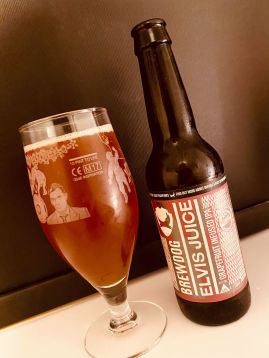 I will have to admit, it’s not your typical winter beer, but does it really matter, it’s perfect!

I can hugely say as a beer drinker, I can enormously understand why Brewdog has been so successful over the years and in my mind, they will continue to strive within the future.

Also, this beer is super cheap to buy and can be found widely in many supermarkets, so you don’t need to go to a pub and try it. You can enjoy it in the comfort of your own home!

The only negative aspect of this beer is how moreish it is, I mean I can tell why its 6.5% ABV, I could easily drink bottles of this!

Majority of Brewdog’s beers are only available in cans or bottles, it’s very rare that they are available on draught form, but again to reiterate, it’s so much easier to purchase this splendid drink from the supermarket.

I could go on all day about this beer, but it right that you have to stop at some point, but honestly: WOW, what a beer!

If you haven’t tried Elvis Juice by Brewdog then now is the time to sample it and let me know your own thoughts.

I am hugely lucky to have another 3 more bottles of this divine beer at home, so I am really looking forward to indulging into this beer throughout lockdown 2!

Moving away from the beer, I just wanted to say how much I’ve really enjoyed bringing you this relaunch post to you all, and I am immensely proud to bringing The Cask Connoisseur back to your eyes.

I wish you all a fantastic weekend and please stay tuned for more posts coming up next week!