Posted on 21st Nov 2020 by Thecaskconnoisseur

Hello to you all and once again its the weekend, I am today super excited because me and my family are getting into the Christmas spirit by putting up our decorations.

I just thought after the year we’ve had with the pandemic that’s gone on, we decided to put them up early and mum has already said we are going all out this year with the lights and decorations.

We all know that we’ve got to remain positive and just think that 2021 will be a better year, I am deeply missing my girlfriend Isobel so much, but I know now it won’t be too long until we are reunited.

The most amazing thing though is that me and Isobel will be moving in with each other, I am so excited and I truly can’t wait. Roll on 2021!!

Anyway, moving on, you may well remember in my last post, I wrote about a marvellous beer called Tribute that is brewed by the St Austell Brewery in Cornwall.

Today’s post is on beautiful beer that was packaged into my Honest Brew mixed beer case which I bought in the last lockdown!

If you adore your stouts, then I can fully assure you that you will love Broken Dream!

Broken Dream (6.5% ABV) is an exquisite Breakfast Stout which is proudly brewed by Siren Craft Brew, which was first launched in July 2013!

The first thing you are wondering is what’s a Breakfast Stout!

A Breakfast Stout is in fact linked to the first food item that you have in the morning, all stouts that are considered as Breakfast Stouts contain coffee and oats within the brewing recipe.

Now, I am not suggesting that in the morning once you wake up you have a pint of breakfast stout, the name is just to provide the morning glory ingredients that have gone into making the beer, I would suggest though that you can try this beer after a long hard day in the office.

Siren Craft Brew is situated in Wokingham and is situated 37 miles west of London and it has been revealed as one of many favourite craft breweries in the south of England.

The brewery was founded by Darren Anley in 2013 and there mission in mind is to introduce exciting, full-flavoured and forward-thinking beers to as many people as possible.

His concept of starting up his own business began in 2010, with his passion within the industry, he felt it was only right that he could achieve his goal and open up his first brewery, Siren Craft Brew was born!

Siren are incredibly lucky enough to have been named the ‘Best Brewer in England’ by Ratebeer users in 2015, furthermore, the brewery was awarded by for its Broken Dream Breakfast Stout by CAMRA for Supreme Champion Beer Of Britain in 2018!

The philosophy of this brewery is to brew the beer they want to make, this includes sourcing the best ingredients and if you take Broken Dream, the coffee which is used in the recipe has to be the finest out there and this instance the coffee costs more than what other breweries spend on hops.

As you can see from the picture above, this is where all the magic happens and where the team over at Siren Craft Brew put their passion into the making and producing of great beer.

I was completely lucky that Honest Brew supplied one of the finest stouts into this mixed case because I have to admit that it was honestly one of the best stouts I’ve ever tried, and it was also my first breakfast stout I’ve ever indulged into.

I am really hoping in the future that Siren Craft Brew are going to continue to brew some exceptional quality beer and I am really looking forward to trying more from this brewery.

An indulgence of chocolate and speciality malts, Broken Dream is smooth, unctuous and completely moreish. It’s brewed with milk sugar for balance and mouthfeel, along with carefully selected espresso from London’s Climpson & Sons.

I can guarantee you from reading this, that you want to try this beer now, well yes then you should haha!

It’s been a while since I’ve tried any of my Honest Brew beers and to be honest, I still have a handful of bottles and cans left and now that we are back in lockdown I thought it was only right to use the time and try as many as I can.

Especially stouts because they are my favourite styles of beer, I was really looking forward to digging into this gorgeous beer!

Just look at the design of the can, I can’t believe how artistic it looks, majority of craft breweries do tend to make the cans and bottles look jazzy as it is more appealing and in my mind makes it persuades you to buy it. 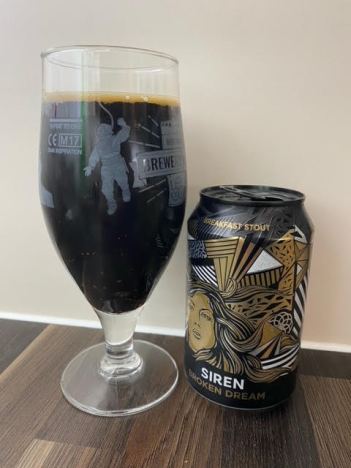 I think there is only one word for it, WOW, just WOW!

This beer was so fantastic, it was absolutely amazing and luxurious, it was literally one of the best stouts I’ve ever sampled.

I mean personally, the coffee and chocolate flavours were floating through every time I took a sip, I was so deeply disappointed when I was getting to the end, even though the flavours were long lasting.

After an hour of finishing the beer, I still had the chocolate flavours lingering on my palate, I really enjoyed this beer so much, it was ultimately and completely the Perfect Pint!

As I mentioned at the start of this post, if you want a beer that is brimming with flavour then I have to say Broken Dream Breakfast Stout is the way to go.

You can either buy the twelve of Best Of British Beers to receive this beer, or you can buy this standalone beer from Siren Craft Brew themselves.

This beer was so delicious, I have to give it a 10 out of 10, so you know what means, I am sending you all huge recommendations for you all to try this beer, but make sure you do the sensible option and buy two cans, then you’ll realise how much you will love this beer.

If you have tried this beer before, I would love to hear your own personal thoughts!

If you haven’t done so already, why not reach out to me on the following social media platforms where you can see gallons of beer/whisky-related content, I can guarantee you your glass will not sit empty!

I wish you all fantastic weekend and sending you many positive vibes if you’re indulging into a beer or whisky over the weekend, why not send me over your pictures and I’ll promote them out on my page for you!