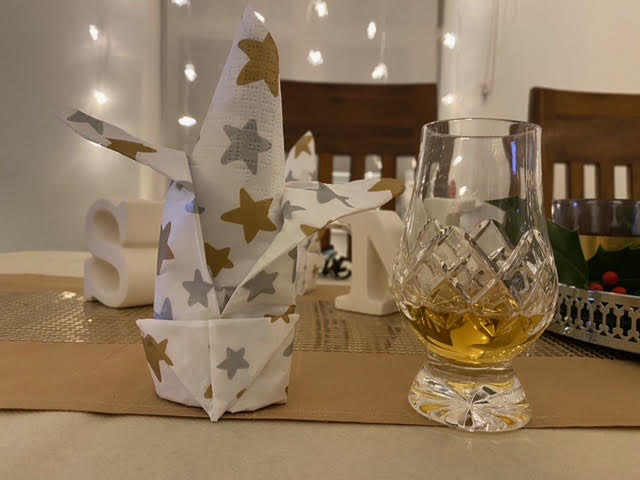 Posted on 28th Dec 2020 by Thecaskconnoisseur

Hello to all of you, its that time of the year again where we’re all really confused on what day of the week it is!

I mean is it Saturday or Sunday today, I can’t work it out, haha!

I hope you all got some lovely gifts for Christmas, I certainly did, I truly couldn’t believe how much alcohol I got this year: whisky, beer, baileys, you name it!

However, I was completely gobsmacked with the Christmas presents that Isobel got me for Christmas, more whisky, but especially this whisky pack below, which contained some of the finest whiskies ever, majority of these whiskies are like thirty years old!

I have made a strict promise though, this whisky pack will be going straight into my whisky collection, I have decided to save it just because its to valuable to drink!

What are your thoughts on this pack, do you like the sound of it? 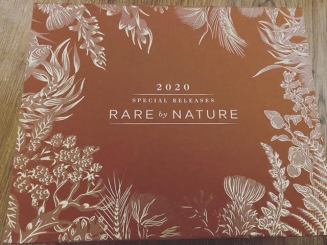 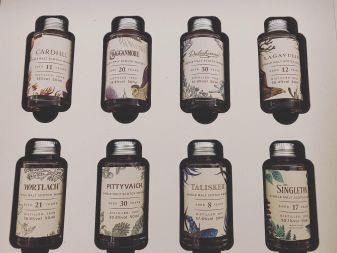 I was over the moon when I opened up the tasting set, I just couldn’t believe my eyes, all that whisky!

Now though, its time to move on today’s post which is on a tremendous single scotch whisky called The Glenfiddich 12 Year Old!

The story began in 1887, when William Grant set out his own lifelong ambitions and started building his own distillery along with his nine children and a single stone mason.

After one whole year of building the distillery stone by stone, William named his distillery Glenfiddich which basically means Gaelic for Valley of the Deer.

After completion of the distillery, the first drop of spirit fell from the copper stills on Christmas Day 1887!

Then, in 1923, William’s grandson Grant Gordon joins the family firm to help increase whisky production, at this point in time the Glenfiddich Distillery was one of the six distilleries that were currently still operating in Scotland.

Next, in 1957, William’s grandson insisted that the distillery had coppersmiths onsite, coppersmiths are skilled craftsmen which help with the maintenance of the copper stills, a couple of years later Glenfiddich acquired some coppersmiths and then decided to build a cooperage.

Still to this very day, the cooperage remains within the distillery and is still widely used!

In 1987, The Glenfiddich Distillery celebrated its 100th Anniversary, to celebrate the milestone, the distillery bottled a commemorating whisky which was dedicated to William Grant, who’s mission was to produced the best dram in the valley.

Afterwards, in 1991 one of the most finest and collectable whiskies was released which was the first ever vatting of the distillery’s 50 year old!

It has been married to perfect from being matured in nine casks and then was laid down in the 1930s!

Then, suddenly in 2010, extreme snow caused part of the distillery’s roof to collapse, this has terrible consequences as the whisky which was being matured within the casks was being exposed to the cold winter sky.

Luckily, the staff at the warehouse, ran about trying to save every single cask within the intermittent weather, as a kind gesture and tribute to the warehouse staff, the malt master created Snow Phoenix, a limited edition single malt!

The Glenfiddich whisky has a strong track record of being one of the most popular distilleries within the UK, it is hugely available in shops as well as pubs!

As the years go by, we will be able to join together and pay a tribute to William Grant, the man who created the best dram in the valley.

The family’s signature whisky which has been flowing in the valley since 1887, using the finest Highland spring water, this complex single malt scotch whisky delivers flavour and power!

Firstly, being matured in the finest American Oak and European Oak Sherry Casks for twelve years, it is mellowed in oak marrying tuns to create its sweet and subtle oak flavours.

A creamy whisky which has a long, smooth and mellow finish, the twelve year old is the perfect example of Glenfiddich’s unique Speyside style.

It was Christmas Eve Eve, and like most of us, I was wondering what to drink, a lot of my followers will probably know by now, I completely adore my sherried whiskies.

It was then I made my decision and went for the Glenfiddich twelve year old which turned out to be the greatest decision ever. 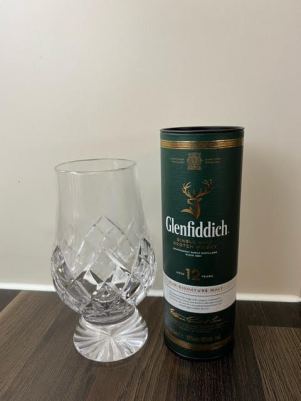 This may look like an optical illusion, but the bottle I had was the smallest size, to be honest it was a real bargain, it only cost £2.00 from Sainsburys.

I was really looking forward to sampling this whisky, I mean who doesn’t like a good glass of the Glenfiddich, its beautiful and perfectly sweet. 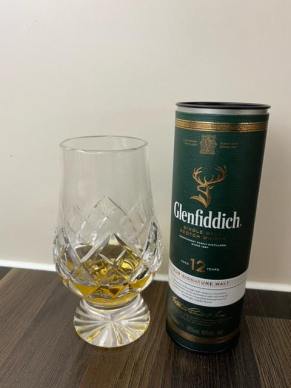 What an amazing colour, but it wasn’t the colour which was the best bit, it was the flavour!

On the nose, there is complex aromas of fruitness, sherry and toffee, the taste was outstanding, it was heavily sherried and wooded.

It was ultimately sweet which had a rich aftertaste which promoted fairly on the palate and was ever lasting, this highly moreish whisky was bursting with flavour, I can guarantee you this will make you wanting more of this marvellous whisky.

Okay so there you have it, The Glenfiddich twelve year old, I can truly imagine that majority of you have tried this whisky and that more than likely you really enjoyed it as well.

I really didn’t want the bottle to end, but I must say I thoroughly enjoyed it so much, this is most definitely a whisky I have to recommend to you all.

When William Grant made his ambitious goal to create the best dram in the valley, who would’ve have thought he could achieve this, and I have to proudly say he has!

The Glenfiddich twelve year old, is and will remain the best dram in the valley!

I really hope you’ve all enjoyed this post, if you do have any questions on this particular whisky or the distillery, please post me your comments and I’ll answer the questions as best as I can.

I hope you enjoy the start of your week, I’ll be back on Wednesday to deliver my next beer post!

Leave a Reply to Mind and Body Intertwined Cancel reply