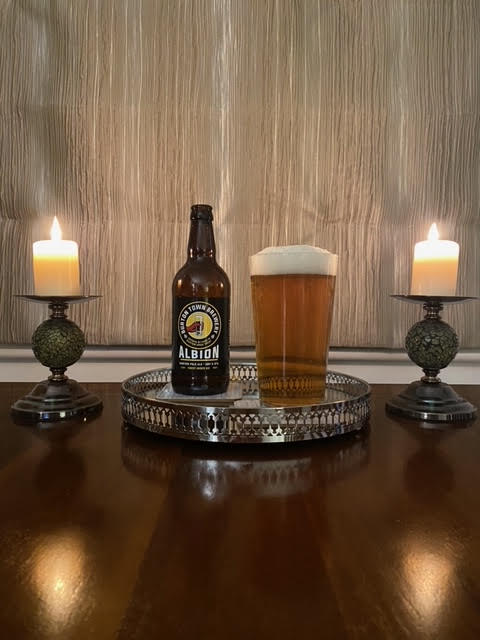 Posted on 13th Feb 2021 by Thecaskconnoisseur

Hello to you all, I hope you’ve all had a fantastic week, it’s crazy to think we’re halfway through February already, it’s unreal to think it will be March in a couple of weeks, springtime is approaching and the longer days will start to take place.

I’m looking forward to this weekend, it’s Valentines Day on Sunday, myself and Isobel have agreed to do a virtual film date with each other, we’ve both decided we’re going to carry on watching Harry Potter. It may be slightly different, but we’ve got to stay safe, but I am really looking forward to it!

In my previous post, I talked about a marvellous beer which is brewed by a fantastic microbrewery (Burton Town Brewery), Modwena Oatmeal Stout (4.8% ABV) is a classical stout which has beautiful flavours of roasted malt and chocolate, it’s an amazing beer and certainly a stout I highly recommend!

In today’s post, I’m going to be reviewing an outstanding and classical session beer called Albion Pale Ale (3.9% ABV), this is the second beer that I’ve now sampled from Burton Town Brewery and I can’t wait to tell you how gorgeous this beer is.

Albion is a special edition pale ale which was first brewed to mark the outstanding success of Burton Upon Trent home football club, Burton Albion!

The beer was first launched in 2016 after a long-running success when Burton Albion was promoted to the English Football Championship League, the highest division that the team has ever played in its history.

Burton Town Brewery is situated ten minutes away from the stadium and it’s the closest micropub to have a pint at before the start of the match.

If the country was in normal circumstances, many Burton Albion fans would stop off at Burton Town Brewery and sample the Albion Pale Ale, it’s a perfect drink to have because its a session beer and very low in alcohol.

Burton Town Brewery is one of the many microbreweries which creates beers for special occasions, specifically, these beers are brewed for people going the extra mile or for a specific event that’s taking place.

On occasions, some of these beers are limited and are only brewed on a seasonal basis, the Albion Pale Ale is available all year round, although I would say this beer is perfect for the spring season due to the flavours that it provides.

At first Albion Pale Ale was only available in cask form, however, due to the demand and many people enjoying this beer, the team decided to produce this beer into bottles as well and I can say this has been a gigantic success for the team at Burton Town.

Once it’s safe, I would personally recommend to you all to visit this microbrewery and to sample this iconic beer, I can tell you one thing it will be certainly worth it, especially for how amazing the taste is!

An amber coloured session beer which is low in alcohol, a luxurious refreshing pale ale which delivers a crisp and sweet taste, leading to a delicious fruity aftertaste.

As the winter season starts drawing to a close, I am now in the next phase of sampling a variety of beers that match well for Spring, normally I like to try beers which have a combination of sweet and fruity flavours.

The Albion pale ale is a prime example of a beer which has those refreshing sweet aromas, so I was really happy to see it in stock at Brews Of The World.

On the same day when I picked up my bottle of Modwena Oatmeal Stout, I just knew I had to give the Albion Pale Ale a try as well, especially from reading the fantastic reviews on this beer. This pale ale was retailed at an outstanding price of £3.60 which is certainly a great value for money.

It was now time to crack open my bottle of Albion Pale Ale and I was deeply excited to sample it for the first time. 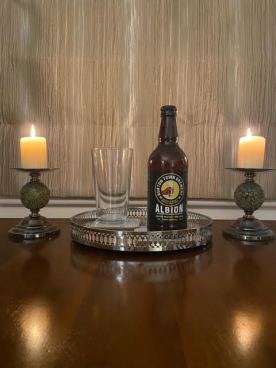 I have to admit, as soon as I cracked open the bottle, there were so many different aromas pouring out of the top of the bottle, a small hint of citrus along with many other tropical fruits, such as mango and passionfruit.

On the other hand, due to the number of hops being used in the brewing process, I would definitely say this beer is intensively hoppy, but the hoppiness doesn’t disappoint the overall satisfaction of the beer, the beer is perfectly well balanced throughout.

I would honestly say this beer was absolutely perfect, it’s a beer that I could have sampled all night, I just wished I had another two bottles of it.

If you prefer your strong beers then I personally suggest this beer wouldn’t be best suited for you, but if you enjoy a lighter beer which is sweet and not so bitter, then I definitely recommend the Albion Pale Ale to you all.

Now that I’ve tried this beer in bottle form, I am hoping when the pubs re-open I can sample this beer from the pumps and see if there are any significant differences.

I really hope you’ve all enjoyed this post, if you do have any questions on this beer or want any information about the microbrewery, please post them in the comments and I’ll answer them as best as I can.

I wish you all a fantastic weekend!

This is a collaborative post with Brews Of The World, all beer review posts are subject to my own honest opinion.