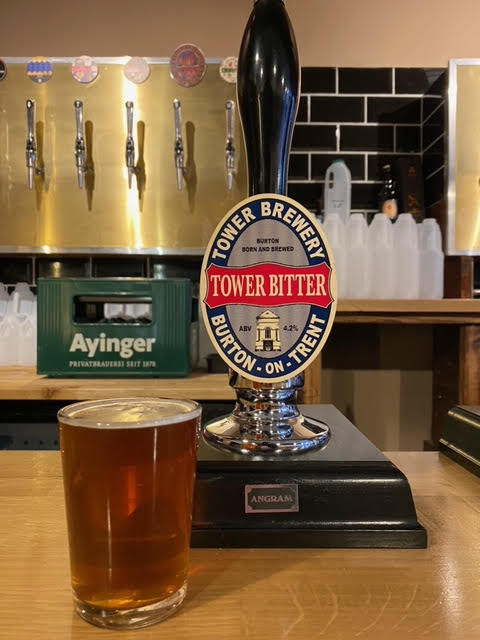 Posted on 3rd Mar 2021 by Thecaskconnoisseur

Yes, I’m going to admit, I’ve decided to focus on two more beers from my hometown, Burton Upon Trent and you’re probably wondering, why?, my answer is simple, I haven’t actually reviewed any beers from this microbrewery based in the town, so I decided now was the time!

To be fair, if it wasn’t for Brews Of The World, I wouldn’t have had the chance to try these two beers from such an awesome microbrewery that has loads of history.

On my website, if you scroll over to the ‘Breweries’ section and click on ‘Microbreweries’ if you then scan for Burton Tower Brewery, this is what I am focusing my two beers on this week. Furthermore, these next two posts will be completing part of my journey into some of Burton’s finest and quality beers. It’s now the right time to move on and explore many other parts of the UK to find and sample some more outstanding beers.

Today’s post is based on Tower Bitter (4.2% ABV), which is proudly brought to you from Burton Tower Brewery!

Burton Tower Brewery or Tower Brewery as it’s well known as is an outstanding microbrewery which is situated inside an old water tower on Glensyl Way in Burton Upon Trent! The brewery is surrounded by a large industrial estate and is only located five minutes away from its neighbouring Burton Town Brewery.

The building was formally known as Waltsitch Maltings and it’s to believe that the structure was built around the 1870s by Thomas Salt & Co Ltd and then around sixty years later the building was then sold to Burton Bass Brewers & Co.

Tower Brewery, is the second microbrewery located in Burton which is a family run business, the first being, Gates Burton Brewery.

Anyway, the brewery officially began production on the 10th April 2001, and the brewery is at the helm of producing five popular beers that are available in cask ale and bottles.

Tower Brewery from the outside, looks small and it is fact one of the smallest microbreweries based in Burton, but on the inside its magical! As soon as you walk inside the building you are welcomed by a huge seating area which is where most of the brewery’s events take place, comedy nights are a popular event, I’ve actually been to a couple of the comedy evenings and I have to say they are absolutely fantastic and funny of course.

Furthermore, if you look towards the back end of the building, this is where the brewing takes place, on each side of the building there are 4 large brewing tanks, I would’ve love to get the chance to witness the team brewing some beer, I also remembered when I entered inside the building, the smell of brewing beer and hops was beautiful, I just couldn’t wait to try a pint of beer in the home of where the beer is brewed.

Out of all of the beers that are produced onsite, Tower Bitter is the second most popular beer with Salt’s Burton Ale being the flagship beer as it was originally named after the former maltings house.

I am really looking forward to bringing you my personal review on this iconic beer, but first let me provide you with those outstanding tasting notes, just to get you in the mood for grabbing a beer!

A light brown ale that has a malty aroma with a full hop and fruit taste. This pleasantly sweet beer has a wonderful bitterness that lingers on the palate.

Local beers are always something that many people enjoy, I am always partial to a local beer, the problem is there’s so many to choose from and the other issue is deciding which one to try.

On the other hand, what about if you try a local beer that you’ve never sampled before, sometimes you might think it’s risky in case you don’t like the beer, its okay to dislike a beer, I’ve had loads of beers before that haven’t been the greatest, your palate cannot simply enjoy everything, even if you are a top beer judge! You have to be honest when approaching and sampling a beer! I’ll always be honest in my posts and I will be honest in this post, this beer was perfect, but something small was missing sadly.

Tower Bitter can be found in a couple of pubs within Burton, but personally, I’ve struggled to find and locate where you can purchase the bottles from, I would love to find them, but I’ve had no luck as of yet.

Brews Of The World were selling Tower Bitter on a takeout purchase, so I decided to buy 1 pint of this local beer which was retailed at £2.50 per pint, a real deal you would say, I was amazed by the price, so it’s definitely worth it!

Beer o’clock came round so quickly, so I was really looking forward to trying and sampling this beer, I couldn’t wait to get stuck in! 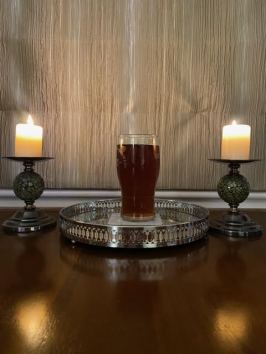 Firstly, what can I say, well the beer smelt amazing, there was a gorgeous malty hoppy aroma which was really appealing as I poured the beer into the glass, the aromas were perfectly balanced and not too overpowering, like some beers that I’ve sampled.

The taste was great but sadly I wasn’t getting many fruity flavours which were disappointing, I was really expecting a sweet and fruity beer which was combined with the lingering bitterness. Instead, I just had a pint of beer which was full of bitter and not a fruity bitter beer which was what I was expecting.

However, this doesn’t change the overall score of what I thought of this beer, it really is a perfect beer and certainly a beer I would highly recommend to you all, but the sweetness just let the beer down, I will though in the future when I get the chance, I will sample this beer once again and see if my tasting opinion will change.

I wish you all a fantastic week and I shall return to your screens at the weekend!

This is a collaborative post with Brews Of The World, all beer review posts are subject to my own honest opinion.