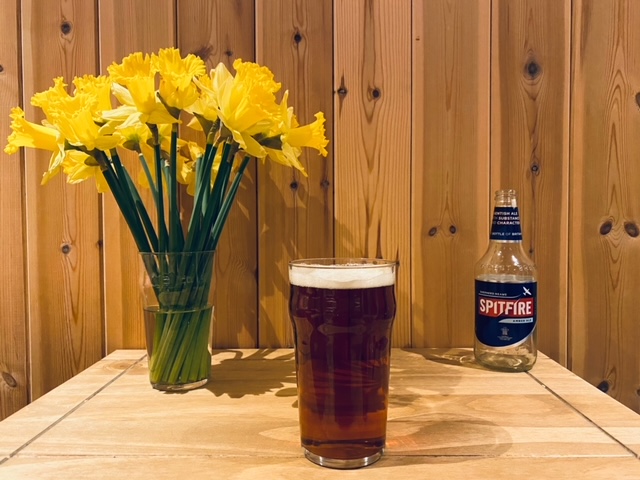 Posted on 14th Mar 2021 by Thecaskconnoisseur

Sadly though, the restaurant was empty, pubs were ordered to close and the national lockdown was starting to take effect for the next four months, it was a horrible atmosphere walking in on an empty building, not being able to see all the fantastic customers enjoying our food and having a tremendous time.

On the other hand, it’s hopeful that in under a months time, outdoor hospitality will be able to resume and I am so looking forward to returning to my workplace, but also doing the job I love.

Without any further or do let’s move on to today’s post which is on a classical drink that would be ideal for you to sample at the weekend or if you are indulging in a Sunday roast, I proudly present you with Spitfire Kentish Ale (4.5% ABV).

Spitfire Kentish Ale is a classical amber beer that is proudly brewed by Shepherd Neame which is one of Britain’s oldest breweries, to be precise the brewery’s founding date was 1698 making it approximately 320 years old.

Shepherd Neame is one of many breweries which has some of the most amazing branded beers as part of there core range, Spitfire, Bishops Finger, Singha and Samuel Adams to just name a few.

I will admit, I’ve hardly ever sampled any of Shepherd Neame beers, but I was really happy to receive this bottle of Spitfire that came within a hamper that Isobel got me for my birthday back in January!

Now, you are probably wondering what a Kentish Ale is, basically a Kentish Ale is a beer that has fermented malt to deliver a unique strong aroma of hops and a bitter flavour that is balanced throughout. The majority of Kentish beers are golden brown in colour with a light creamy head when poured, these beers often range from 3.5% ABV to 6.0% ABV. Also, another meaning of Kentish just means the county of Kent.

The reason being why this beer is such a classic because it was first brewed to commemorate the 50th anniversary of the Battle of Britain which was a military campaign of the Second World War.

Spitfire is certainly one of the UK’s best-loved beers and one of the most populated beers that can be found in many pubs across Britain, especially around the county of Kent. There has been such a strong reputation built when this beer was first brewed, many people around the country enjoyed sampling this awesome beer.

Shepherd Neame have gone above and beyond and been able to create not just one beer, but there is also a golden ale and a lager part of the collection, I’ve rarely come across the golden ale or the lager but I’ll be keen to try them both.

I believe that Spitfire is going to be one of those beers that will always be remembered and one of those kinds of ales that everyone will enjoy sampling for the future years to come.

Spitfire amber ale is a classic and traditional beer that has been produced with the use of Kentish hops. There is a gorgeous orange marmalade flavour with sweet biscuits and caramel malts, this then leaves a peppery dry finish on the palate.

Over the past couple of weeks, I’ve been providing a selection of beer posts from Brews Of The World, however, just to mix things up a little, I am providing this review on a beer from my own personal stash.

As I mentioned earlier in this post, this beer was part of a hamper that Isobel got me for my birthday, to be fair it was a perfect gift, it contained many little treats that men love, especially beer!

I’ve always wanted to sample a bottle of Spitfire amber, so I was incredibly pleased to see it in the hamper, instead of drinking it on the day, I actually left it for a couple of months and decided to try it two nights ago! 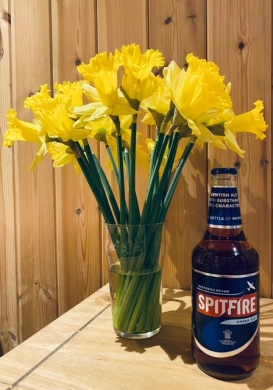 I was starting to get into that Friday feeling, I was all set and ready to sample this classical beer, oh how excited I was to get the top of the bottle, I know that sounds weird, hey ho!!

Just look at that creamy head! The aromas as well were very welcoming, caramel malts just made the beer smell absolutely gorgeous. The taste of the beer was phenomenal, the beer was fairly sweet and a balance of bitter was pushed throughout the glass.

The dry peppery finish on the palate was amazing, however, I would suggest that the sweetness of the beer overrides the pepper, which made this beer really sweet.

This was such an easy drink and one that should be toasted to commemorate the ending of the Battle Of Britain and now this has made me realise now that I’ve sampled the amber ale, I am certainly keen to taste the golden ale.

I truthfully cannot recommend this beer enough, it was perfect in every way, it had a mixture of everything inside the glass, this was what made the beer taste so special and why I enjoyed it so much. The beer can be found in the majority of supermarket stores, so I would certainly suggest you sample this beer and let me know your own personal thoughts.

I hope you’ve really enjoyed this post, if you have any questions on the beer or the brewery (Shepherd Neame), please just drop them off in the comments and I’ll answer them as best as I can.

I wish you all to enjoy the rest of the weekend and I am looking forward to returning next week with two more craft beer posts.